Is the Toyota Camry the Most Reliable Vehicle Ever?

It shouldn’t come as a surprise to many that the latest Vehicle Dependability Study by J.D. Power and Associates has the Toyota Camry ranked at the most dependable vehicle over the past three years. 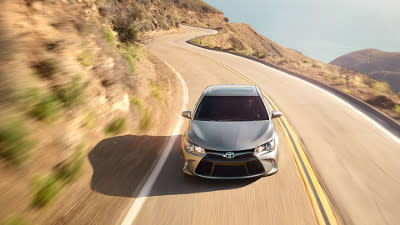 Over 35,000 vehicle owners responded to the survey, and the Toyota Camry had the fewest problems per 100 vehicles. The outstanding reliability of the Camry is one thing that makes the purchase of a 2017 Toyota Camry for sale in Jefferson City, MO such a popular proposition. The Toyota Camry has been the best-selling car in America for over 14 years!

A Different Way of Thinking

Toyota attributes the reliability of the 2017 Toyota Camry and its other models to the nature of its Japanese business model. Employees in Western businesses tend to move from company to company, but Toyota employees often work at Toyota for the entirety of their careers. This inevitably leads to engineers who know every aspect of their job and is undoubtedly the 2017 Toyota Camry for sale in Missouri is one of the most reliable vehicles ever.

Toyota’s unique manufacturing processes have long been a big part of the Toyota Camry’s success. After World War II, European and American manufacturers were largely following Ford’s production line model that could churn out more cars in a shorter period of time but at the price of increased possible flaws.

Toyota instead went a different route, opting to use a single press for each part required in each car. It was a slower method but allowed for better inspections. This later evolved into the Toyota Production System (TPS) that ensures there is always a human eye watching over each aspect of any automated manufacturing process.

There’s a temptation for any company to roll out new features as quickly as possible to beat the competition. As can be seen with the Toyota Camry, Toyota never gets sucked into this model of working, instead thinking carefully about upgrades and rolling out new features only when the automaker is sure that they are safe and of benefit to owners.

This means that the Toyota Camry is never rushed through a manufacturing process and more research and testing is performed on each and every part. Toyota knows that safety features and reliability are key factors families consider when purchasing a vehicle and it has paid off for Toyota in spades, making the Toyota Camry the best-selling car around.

The slow-and-steady evolution of Toyota vehicles has led to nameplates that have endured for decades. Whereas other manufacturers often make sweeping changes in brand identity and design language to their vehicles, Toyota steadily improves and perfects its vehicles. The Camry, the Land Cruiser, the 4Runner, the Corolla – these nameplates have been around for decades with the fundamentals of their appeal never changing.

The 2017 Toyota Camry Covers All Bases

Buyers of the 2017 Toyota Camry for sale in Missouri aren’t looking for the fastest sports car or a vehicle that can carry a whole football team but they are looking for a car that doesn’t let them down on any metric. The 2.4-liter 4-cylinder engine is powerful enough at 178 horsepower and economic at the gas pump.

The standard and available safety features in the 2017 Camry are ahead of the curve, with blind spot monitors, rear cross-traffic alerts, dynamic radar cruise control and no less than ten airbags. Safety Connect emergency assistance can help you before, during and after a collision, so your family is safe in a 2017 Toyota Camry.

The Toyota Camry is efficient, stylish, reliable and affordable. Choose features like wood-grain accents and leather-trimmed seating to turn your Camry into a luxury vehicle. It offers the amenities of a luxury car without the luxury car price. Toyota has also always been at the forefront when it comes to in-car technology, from safety tech to infotainment.

What Does This Mean for Consumers?

Also consider that because the Toyota Camry is extra reliable you’re going to be spending less on mechanical issues as time goes by, saving you even more money. It’s worth paying for the outstanding quality of the 2017 Toyota Camry when the price is roughly the same as less reliable choices - and if you have your Camry regularly maintained at Riley Toyota you can expect to get over 200,000 miles out of it!

Similarly, as the Toyota Camry is known to be extremely reliable and last a long time, the resale value remains high for longer. When you sell you should on average get a better percentage return than if you had chosen a less reliable vehicle, as people are less likely to trust a pre-owned vehicle from poorer quality manufacturers.

VISIT US ON SOCIAL MEDIA