Why are Young People choosing the 2017 Toyota Camry?

It’s official – the Toyota Camry is cool. More and more younger drivers are flocking to choose the Toyota Camry as their ride of choice, thanks to the gradual evolution of the award-winning, best-selling vehicle. 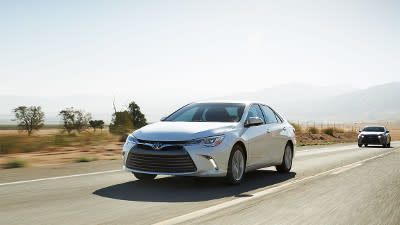 As the model year comes to a close, it’s a fine time to consider picking up a deal in the form of the 2017 Toyota Camry. With the 2018 Toyota Camry on the horizon, it is often possible to pick up a used Toyota Camry for sale in Missouri or Kansas at a nice discount.

Why is the Toyota Camry becoming the go-to car for younger buyers? In our experience, there is one model, in particular, that is drawing them in. The 2017 Toyota Camry SE (and XSE) account for almost half of all Camrys sold today and on average their buyers are five years younger than the average Camry buyer. That’s a big difference that shows there’s something special about the SE and XSE.

Certainly, when you see the 2017 Toyota Camry SE on our Central Missouri Toyota dealership lot it stands apart from the other Camrys with its unique front fascia design and piano-black mesh grille. Notice that the halogen or LED lights fitted are accentuated with a dark chrome coating – the standard Camry’s headlights are clear. You get those ace LED lights as part of the standard package of the XSE, by the way.

The sporty stance is apparent, making the SE and XSE a different beast entirely. Take a look at the wheels too – the SE gets awesome 17-inch graphite finish alloy wheels and the XSE goes all out with 18-inch machine-finished alloys with gloss black accents.

Don’t think that the SE and XSE merely look the part – they’re filled with a raft of sport-driving oriented features that make the ride more tight and responsive. If you choose the XSE you’ll already be riding on P224/45R18 track tires for better grip. Both of the models have a tuned suspension that keeps the ride comfortable but offers more precise handling.

Inside, the SE and XSE have been given the sport treatment too. The front seats have been swapped for sport versions that grip the driver and passenger better for when you’re tackling a corner on a track. You as the driver get your hands on a custom three-spoke steering wheel that’s decked out in leather.

Though the popular four-cylinder engine is still available on the SE and XSE models, those looking for a peppier ride opt for the V6 engine. You can even choose the SE treatment if you opt for the 2017 Camry Hybrid.

On the right, you’ll find the comfortable multi-mode console shifter but there are also steering wheel paddle shifters so you can more easily command the six-speed automatic transmission. On SE and XSE models you’ll find the exclusive ‘S’ mode that kicks the transmission into overdrive, offering you faster shift times and downshift blipping control.

It’s not just the performance and style upgrades that have been turning younger buyers onto the Camry in droves. Young people have simply become savvier, realizing that buying a dependable car that will never offer them any problems is the way to go. And what better car to choose than the Toyota Camry, considered the most reliable vehicle on the road today. Major studies, including the influential J.D. Power and Associates’ Vehicle Dependability Study, have shown that the Camry has the fewest reported problems of any vehicle over the past three years.

An issue young buyers often has is choosing a used car for sale in Missouri to save on the initial outlay only to find they’re paying for their short-sightedness at the gas pumps. Older cars with poorer fuel economy are being usurped by newer, more reliable and economical vehicles that have advanced technology that keeps those fuel costs down.

Toyota was one of the first manufacturers to work on hybrid and electric vehicles, and its two decades of experience in the field has paid dividends. Looking at the 2017 Toyota Camry Hybrid for sale in Jefferson City, for example, you’ll see the Hybrid Synergy Drive is able to get you 42 miles to the gallon in the city. The electric motor is paired with a 2.5-liter four-cylinder engine so the total output is 200 horsepower, taking you from zero to 60 mph in 7.6 seconds, so it’s no slouch either. If you’re only making relatively short trips you can travel up to 1.6 miles on electric power alone at speeds up to 25 mph.

The complete package of style, performance, dependability and advanced technology at a price you can afford, there are many reasons that the 2017 Toyota Camry should be at the top of your shopping list if you’re looking for a new or used car in Missouri. Certainly, think about checking out the 2017 Toyota Camrys for sale in Jefferson City at Riley Toyota to see the bargains we can offer you.

VISIT US ON SOCIAL MEDIA